Is there really a need for political essays from somebody in computer science? Doesn't the media industry fulfill its role of a fourth power? There is a number of reasons why computer science becomes more and more political: IT penetrates society at an alarming rate. Never before governments and companies had more means to observe and control human behavior. There are tons of critical technologies which have a huge impact on our life: DRM, spy programs, data collection, the use of cryptography to control the lifecycle of products etc.

This is why computer science people need to take a stand and try to communicate their fears. Sometimes these get expressed in private mail instead of getting published. I will collect essays, hints and recommendations of a political nature here. Some of the articles will be in german as some things get expressed best in ones mother tongue.

A few links and comments on current developments in the german academic education.

Why does it take a guy from the netherlands to ask the right questions in Germany? And yould you have heard about this without social networks? And learn about the censorship by "super-injunction" in Britain: the Guardian-Trafigura case . Note that those are rare exceptions in a profession suffering from "Berlusconization".

The Power of Nightmares, more...

The BBC documentary on fear as a political instrument used by neo-conservatives and islamist terrorists.

The militarization of internal security - The NeoConOpticon Study, more...

Comments on the latest study by Ben Hayes and the Transnational Institure on how military corporations started to dominate reseach in security as well as the definition of internal security itself. Learn about concepts of total control, full spectrum dominance, crowd control and other ideas financed and implemented completely without democratic control and with the help of specially created "dummy" NGOs. Read it! 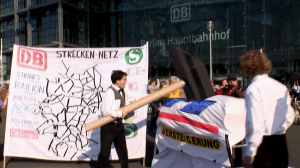