Secondlife - the end of the web?

With all the hype surrounding secondlife a few critical questions might be in order. The hype shows the typical signs of a well constructed network effect in Metcalfes sense: can you afford to sit back and miss the virtual train? 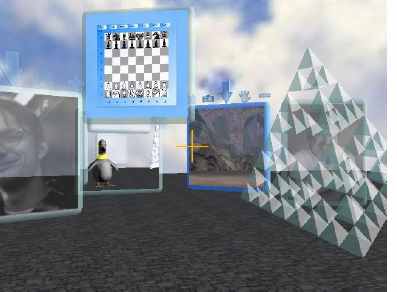 It is always hard to evaluate over-hyped things like Web2.0, SOA, and so on. We are afraid of missing a crucial opportunity and at the same time do not want to spend our bucks on a hype that might die within a few month. I will split the questions about secondlife in two categories. The first category is on virtual worlds and their merits and opportunities. The second category is the business character of secondlife especially and whether it makes sense to join the bandwaggon in an economical or political sense.

Virtual Worlds in my opinion will enrich our ever more virtual communication. It is important to realize that our communication is already now quite virtual: chat, messengers, mail, mailing lists, forum communities, wikis etc. all allow us to communicate and share ideas. The "online family" is becoming the norm within better educated and situated circles and TV is losing out to interactive software. "getting the web back" was one of the political statements of the Web2.0 movement and it included collaboration.

Today our communication suffers from the inferior ways it is done electronically: How do you communicate that your are tired, angry, interested and so on? Yes, there are smilies and other helpers but in general a lot of misunderstandings result from the lack of extra information normally communicated through gestures and faces.

Virtual worlds with their avatars can provide a major improvement here by modeling our feelings more accurately than chat or mail are able to do. We can still stay anonymously - who said that we will have only one virtual presence? But the question is correct because it highlights some problems with avatars. One of them is that they can be quite expensive if the should look rather natural or special: Quality needs modeling and scripting - both rather expensive tasks if you need to pay for them. Of course there is always the possiblity that you don't care about your looks - but then, why are you joining a virtual world?

I am not going to really touch the ton of legal and social questions around avatars and virtual identities. Rene Schneider correctly pointed out the problems when a carefully crafted character is suddenly destroyed due to a disgruntled company that runs the virtual world, due to misinformation or simply due to IT failures. The character is part of your social community which may be centered around a guild or other virtual communitiy. Much like a club in "real" life - whatefer "real" is supposed to mean compared to the "other real" in virtual worlds. What is "virtual" about people spending hours or days or weeks in a special world, communicating with friends, working on projects in this world and so on? Sociologiests have it a little bit easier here: We have long ago realized that people act on what they THINK is real and not whatever WE THINK is real. (I believe it was Thomas who stated this early on).

Do avatars dream of electric sheep (abusing the famous SF-book by John Brunner). How "real" are our avatars going to be? Do they have legal rights? How about assuming an identiy that looks like some famous person? When will we have a real "Idoru"? When will the first avatar pass the turing test? (Some people already pass the computer test successfully (;-)).

I guess it is quite useless to whine about this development as "unnatural". Games like WOW and spaces like Wikis have prepared the general public for a life in a virtual world/community and now it is becoming a reality.

But this world - at least if modeled like secondlife - has some funny characteristics as well: The space methphor is ruling. The world is modeled after reality: you need to buy ground to build a house. You need to move/fly around to go places. You cannot penetrate walls etc. Funny: this is a virtual world but it constrains you in a physical way. that makes it easier to understand and manipulate - but is it useful? Remember what David Gelernter said about Operating Systems and how they store files: like the good old library did with real volumes. But this does not take advantage of the fact that these files are VIRTUAL - just bits that can be moved, duplicated, re-categorized at the speed of light and whose "physical" location does not matter.

Game developers have long known the difficulties of integrating physics engines into games: the game logic starts easily fighting with the physics and the game idea might suffer. It is my opinion that our games developers are currently the best experts to ask on virtual worlds and how to create them. We will need to learn the limits of the spatial methapor in virtual worlds.

The basic question with respect to virtual worlds is how "real" they are going to be. With spatial methaphors in combination with economic factors a duplication of reality happens - no matter how "realistic" avatars are going to be.

This leads us over to the second part of our question: the business character of secondlife. Should you join the bandwagon? What is secondlife? Secondlife is a new namespace. A namespace that has a geographic dimension. Real world entities like ground, houses, people are modeled and sold in this world. That makes it easy for people and organizations to understand and participate: It just duplicates the social and economic relations of the real world including economic power.

Businesswise secondlife is just like Digital Restriction Management (DRM). DRM tries to turn digital content into analog content by trying to re-create physical properties in a digital only world. Turn back time to when only physical copies existed and they were hard to copy or share. DRM does not try to leverage the digital possibilities. It is a backward looking technology driven by desperate business models. Secondlife is just as backward looking in its business model:It is anti-web and anti-internet at its core. The internet and web have been carefully crafted to prevent reliance on single sources. In case of a war the infrastructure should survive. Single point control does not fit into this model. The W3C managed to keep the web open with respect to standards and allowed everybody to join. Web2.0 extends this model through collaboration (mashups, re-mixing etc.)

But secondlife is controlled by one company and the world within this namespace is controlled by the economic power of its participants? How are disputes between inhabitants resolved? In the internet we have ICANN and local organizations, registries etc. In the Lindenworld only the company itself rules - and it will of course listen to its best paying inhabitants.

So if you are a private person or a smaller company: why could you be interested to join this world? You are of course needed right now to get the network effect going. But what then? Will you be able to compete financially with larger players? Modeling is expensive and Linden can always ajust prices for virtual ground. In real life ground in Tokio et.c was impossible to buy for smaller companies. Expect the same development within the virtual world due to the spatial metaphor.

It is actually quite crazy: By duplicating the real world with its current constraints (money, power) Secondlife brings the economic principle of scarceness into the virtual world. But the virtual world is not scarce with respect to resources. "Closeness" is a physical thing - it works differently in the digital world. Bringing the old economy into the new digital and virtual world is the main promise of secondlife. And whoever joins it completely misses the real opportunities of being digital. That's why I see Secondlife just as another form of DRM - a non-technical form of restriction management based directly on the amount of money one can invest in the Lindenworld.

What about the PR guys? They are happy of course. Secondlife is just like the super-magazine or the super-TV-channel: You need to pay top dollar for PR actions but that's nothing new. Finally a model that even old-fashioned PR people can understand. Not the unclear ways of the Internet and Web2.0 where "presence" and "transparency" seem to be important, where content is created collaboratively and where brands need to be protected by managing social groups and not by buying new advertising space.

The result is that you should take a close look at virtual worlds and their opportunities. But you should stay away from proprietary efforts which are trying to create another monopoly based on other peoples money and efforts. You need to realize that the Lindenworld bypasses all Internet and Web standards which ensure open and fair chances for everybody. The Lindenworld fits well to efforts to bring Quality-of-Service approaches to the Internet by creating first and second class transport guaranties. In the Lindenworld there are no "mashups", no Web2.0 based re-use.

How should the virtual world work? Turning the Web into a 3-d world needs to keep the open standard character of the document web. We need a 3-D Standard like HTML to make virtual worlds interoperable. We do not need ONE virtual world within the namespace of one company. We need "wwv.somehost.com" and not "linden.com/secondlife/mypresence"

In other words we need a common virtual namespace like www is a document space. And on top of this we need a protocol like http but well suited for connecting virtual worlds hosted on many servers. The document worlds are connected through links. How are virtual worlds connected? A link there needs to be a spatial metaphor - a door, a building, a way of transport (fly, ride etc.). The hwtp (Hyper-world transport protocol) in connection with HWML (Hyper-World Markup Language) needs to let you follow links seamlessly between virtual worlds.

This is not a new idea. The opencroquet project is one example for a p2p virtual world based on replication. It need not be a p2p solution. Different virtual servers hosted by ISPs could work just as well.

Marc Seeger pointed me to Solipsis, a P2P solution to host virtual worlds. The following is a short quote from their wiki:

"Solipsis is a pure peer-to-peer system for a massively shared virtual world. There are no central servers at all: it only relies on end-users' machines. Solipsis is a public virtual territory. The world is initially empty and only users will fill it by creating and running entities. No pre-existing cities, inhabitants nor scenario to respect... Solipsis is open-source, so everybody can enhance the protocols and the algorithms. Moreover, the system architecture clearly separates the different tasks, so that peer-to-peer hackers as well as multimedia geeks can find a good place to have fun here! Current versions of Solipsis give the opportunity to act as pionneers in a pre-cambrian world. You only have a 2D representation of the virtual world and some basic tools devoted to communications and interactions. But it just works, so, come on and enjoy !"

A good place to find p2p technology is (according to M.Seeger) PlanetPeer.

Finally some articles and links on secondlife which I got from my students: