The creation of 3D-Worlds for technical, economic or entertainment purposes is a unique challenge for computer scientists and software developers. There are few areas where content, user behaviour and computing infrastructure and technology are so tightly connected as e.g. in Massively Multiplayer Online Games (MMOGs), a very popular form of virtual worlds with many millions of players.

In defense of computer games, more...

A few notes on our attempt to defend computer games, including the presentation to media and network specialists in Bartholomä

The uncanny valley and the biology of mind, more... 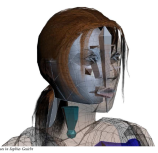 How come that the closer computer animated characters get to reality, the harder it is sometimes for the player to experience complete immersion? Valentin Schwind describes the "uncanny valley" effect in his thesis (with Norman Pohl) on the modeling of Sophie Faber, main game character in the adventure game "Die Stadt Noah". I show some pictures from the various stages of production and add some thoughts on why our brain seems to be so picky about "realistic characters".

I just got through the book by McGraw and Hoglund on "exploiting online games - cheating massively distributed systems". I've tried to extract the most important attack vectors because I found the book rather verbose. And don't expect much "distributed". Most of the attacks discussed are purely local exploits of the game client. But the threat model is quite interesting: The server side needs to trust the game client while being aware that it might be under control of the attacker - so it uses heuristics to find out about the manipulations. This is not a scenario that most business e-services would survive...

There are currently few people who understand the complexity behind virtual worlds and they presumably are from a gaming background. But virtual worlds offer a unique opportunity for the sciences as well: BWelabs is a research project that tries to create a virtual world portal for scientists to collaborate and run virtual and remote experiments. Nanotechnology has been chosen as the first scientific target for BWelabs. This research is sponsored by the MFK of Baden-Württemberg and conducted in cooperation with the Universities of Freiburg (Institute for material science FMF), Stuttgart (Institut for technical optics ITO), FIZ Karlsruhe for scientific documentation, archiving and meta-data and the respective data centers of the participating universities.

The computer science and media faculty at HDM has taken over responsibilities for modelling, usability and security in this research project.Platforms for virtual worlds are another research area offering opportunities for software developers and computer scientists. Currently Darkstar/Wonderland is one of the possible platforms to be used for BWelabs but further research on its scalability and security is needed.

If you are looking for Bachelor or Master thesis work or software projects in the context to virtual worlds please get in touch with me.

The Goal of this MFK funded researh project is to provide a better access to heterogeneous resources (raw experimental data and real equipment) from remote or virtual experiments for science and educational purposes. Core requirements are efficent external access to local environments and the guaranteed transparency and reproducability of experiments.

Throughout their lifecycle data and documents from experiments will have to be accessible and connected with their respective environments. At the heart of BWeLabs are scientific communities and the support for cooperation and collaboration in high-tech research areas. Nanotechnology has been chosen for the pilot phase because it would benefit from better access to costly and rare technical equipment. Existing structures like digital libraries, decentral tools and repositories will be embedded into the 3D-platform of BWeLabs. BWeLabs is under an Open Access policy and sees itself als an open network for scientific data and experimental setups.

BWeLabs is funded by the MFK of Baden Württemberg. The Universities of Freiburg (material science, FMF) and Stuttgart (technical optics ITO), their data centers and libraries, FIZ Karlsruhe (electronic sci.doc., meta-data) and HDM are cooperating in this research project. Please get in touch with me if you would like to participate.